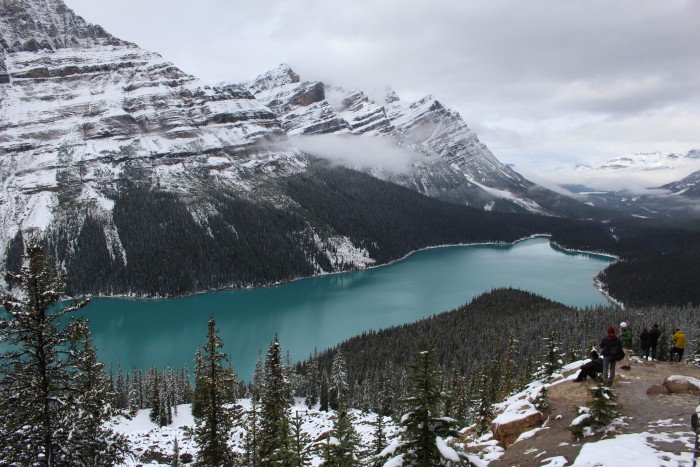 I am an affiliate I hope you love the products I recommend! Just so you know, I may collect a share of sales or other compensation from the links on this page. There is no cost to you.Thank you if you use my links, I really appreciate it!

Okay, so you’re curious about visiting Alberta. Alberta is one of ten provinces in Canada, It houses 19 cities with the most popular being Calgary and Edmonton (capital of Alberta). It is 750 miles (1,200 km) long and 400 miles (640 km) wide. Its southern border connects with the United States at the northern border of the state of Montana. The Alberta tourist attractions are, in Canada, the most impressive touristic areas in the country.

It has a large spectrum of a landscape that includes 600 lakes, coniferous forests, oil reserves, badlands, glaciers, prairies, and a stretch of the Rocky Mountains. So, there is something for everyone. Taking advantage of the beautiful nature Alberta gives us, I made big use of my water filters to be able to drink from the lakes!

Alberta is the “energy” province of Canada because of its vast amounts of oil. Matter of fact, it has the third-largest oil reserve in the world, after Saudi Arabia and Venezuela. In some parts, its oil is known to be so pure that you could pump it straight out of the ground into your car!

Is Alberta safe for a female traveler?

Crime wise, Canada is one of the safest countries to travel in. As a female, you should be able to travel comfortably. It generally follows this theme with the following caveats:

Interestingly enough, cases of West Nile Virus have been reported in Alberta so it is wise to carry deet-based insect repellants in the spring and summer.
Campers and Hikers beware as mountain parks in Canada are “bear country”! You are advised to follow bear safety tips like making sure your area is clean with washed dishes and no food or garbage left unattended. Hikers are advised to travel in groups and regularly make noise to scare off bears along hiking trails. Also, do not bring your pets to bear country! To dispel a popular myth, bears in North America are not attracted to menstrual blood.

Alberta has warm summers and cold winters. Since it is one of the homes of the Canadian Rockies, there are various altitudes and corresponding climates and temperatures. The temperature can range from 20°C to 32°C (68°F to 90°F) in the summer. In the winter, the temps range from -5°C to -15°C (23F to 5F). The weather in the mountains and foothills can be volatile so check the local forecast and road conditions through the Alberta Motor Association. If you visit from November to May, strong chinook winds are common in the southern part of Calgary and have been known to blow vehicles off of the road.

Strongly advice to buy a good coat before coming to Canada.

Let’s begin with the most awesome Alberta tourist attractions with a detailed description of the main recommendations and its prices:

If you are a nature buff, you should check out Jasper National Park in the Canadian Rockies. It is the largest national park in the Rockies and houses forests, rivers, lakes, waterfalls, glaciers, and mountains. One of these falls is the well-known Athabasca Falls. Since there is a spectrum of weather due to the different altitudes, you can camp, hike and ski all in one park! For the same reason, you will see a variety of flora and fauna like moose, deer, elk, sheep, goats, and bears. Oh my!
You can choose from several organized activities like whitewater rafting, kayaking, and sky-tram rides. There are also over 49 tours in Jasper National Park but honorable mention in this category goes to the Maligne Canyon Ice Walk, Winter Wildlife Discovery Tour, Ice Explorer Glacier Tour, Glacier Skywalk and the Wild Current Canoe Adventure.
Tours can range from $57 to $313. 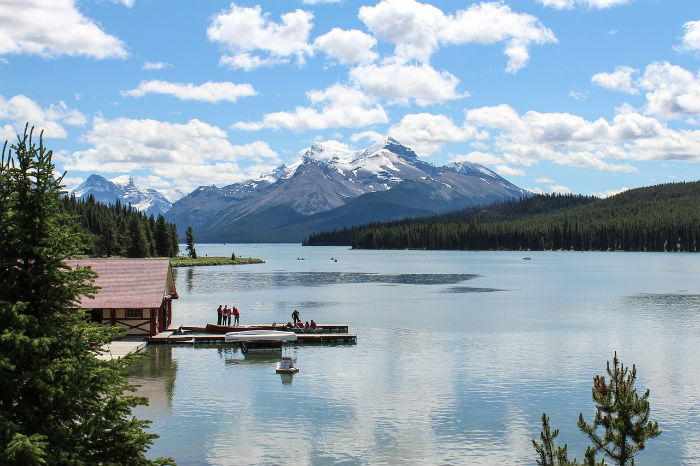 Pick a lake, any old lake. Banff National Park is full of lakes and each one has got its own action going on. Moraine Lake is glacier-fed and touts several canoes, hiking trails, and mountaineering routes. Lake Louise is also glacier-fed with the Rockies as its backdrop and several hiking trails surround it. Peyto Lake gets its water from a glacier whose rocks travel in the water and gives Peyto Lake its beautiful light turquoise color.
The town of Banff is nestled in the park and is a cozy little “ski” town complete with boutiques, souvenir shops, restaurants, and chateau-styled hotels. Tourists can view the spectacular views of the Rocky Mountains while soaking in the naturally heated Banff Upper Hot Springs.  The Alpine Ski World Cup Races are held here, as well as a very popular book and a film festival every November. 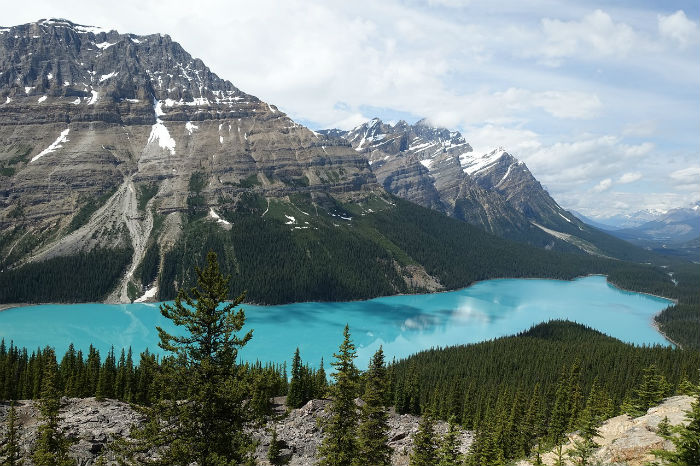 Check out The Hoodoos in Drumheller Valley. They are cool multi-colored sandstone pillars with rock tops created from centuries of erosion and volcanic activity.
Drumheller is also known as “Town of the Dinosaurs” since dinosaur fossils dated from 75 million years ago are found here, so it is a must-see. 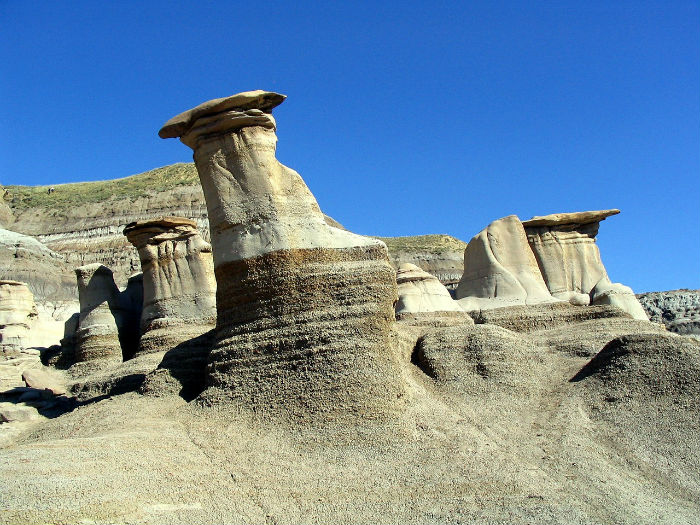 The Hoodoos in Drumheller Valley – Top-rated Attractions in Alberta

Bankhead, The Twenty-Year Town was once a mining town, in Banff National Park, that was owned by the Canadian Pacific Railroad. I don’t think that there is any tumbleweed blowing around, but it became a ghost town, after twenty years when relations broke down between the miners and the Canadian Pacific Railroad. This was followed by a logging and mining ban implemented by the National Parks Act. There are educational plaques around town that tell you its history. 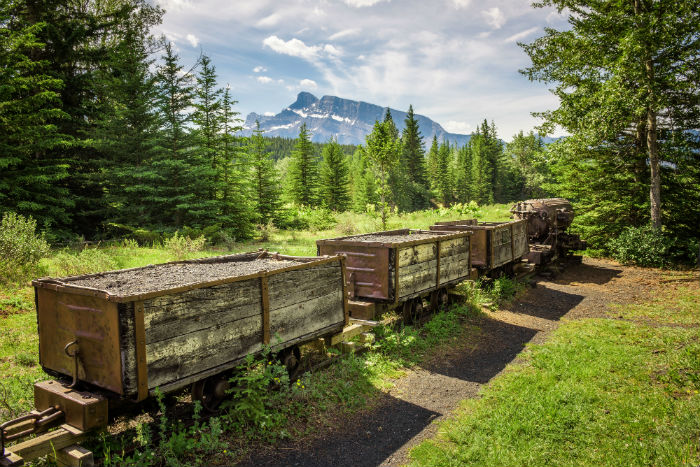 The Vault is located in Kananaskis and was built in 1966 in a mountain. It is thought that the Canadian Government tunneled into the mountain to create a bunker where officials would stay in case of a nuclear event during the Cold War. It was also supposed to store important government documents that would be protected from any type of destruction, including the hydrogen bomb. The vault is currently empty but makes an interesting history. 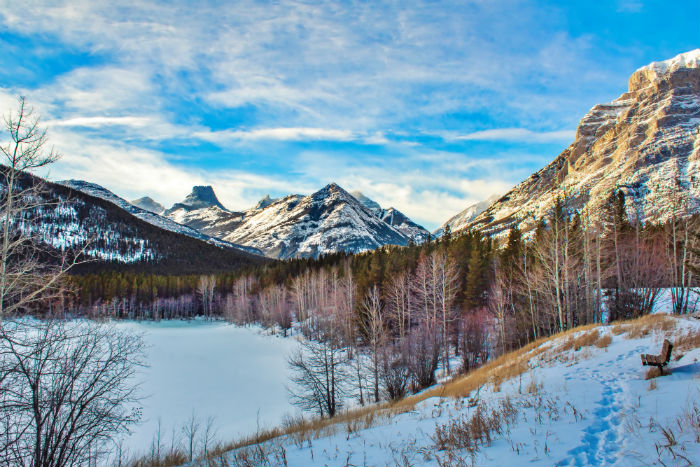 There are these very strange and large rocks in a prairie in Orion (Alberta) that will make you think you are on Mars. These rocks are spherical and approximately 8 feet or 2.5 meters across. (Twilight Zone music plays in the background.) They are some of the largest sandstone “concretions” in the world. It is definitely off of the beaten path about 30 miles southwest of the city of Medicine Hat.
You can catch the Prairie Sprinter Shuttle in Medicine Hat to get there. 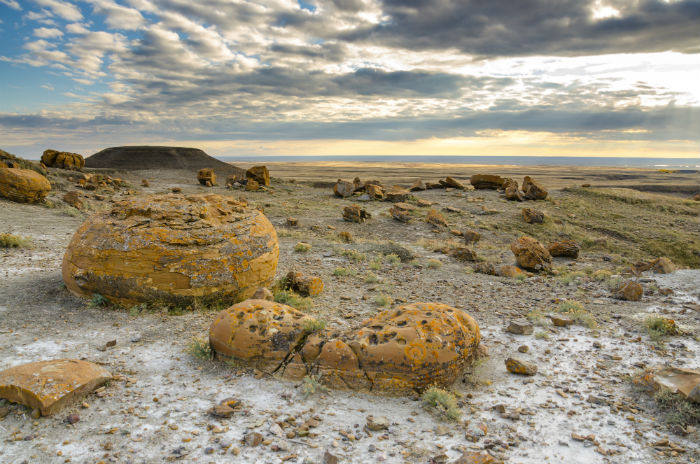 The Banff Springs Hotel is a UNESCO World Heritage site located in the forest in Banff National Park. It was built in 1887 and is known for its splendor and is considered to be one of the most luxurious hotels in the world. Although people come from around the world to ski at the Hotel, it is better known for its grand spa which contains massage rooms, whirlpools, saltwater pools, aromatherapy saunas, and several other “perks”.
Now check this out . . . it is also supposed to be haunted, so this is definitely a must-see! 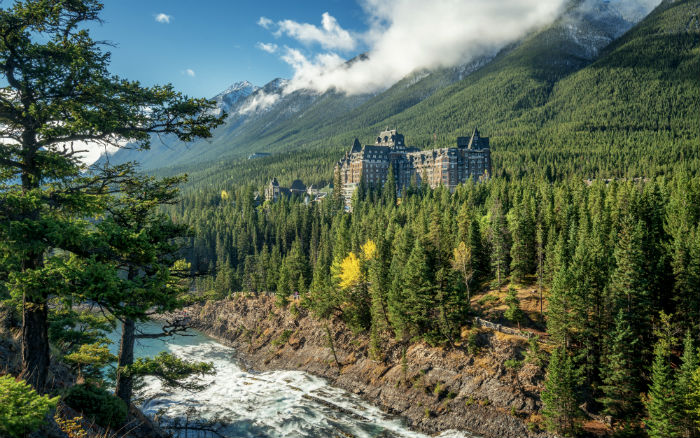 8. Drive on the Icefields Parkway

The Icefields Parkway is a 230 kilometer (142 miles) route that rolls from Lake Louise to Jasper. On this route, you will see beautiful waterfalls, glaciers, and mountains. There are stopping areas along the way to take in the views. There are also several hiking trails where you can go on day hikes. The Iceland Centre is also on this route. Here you can see the Columbia Icefields and the Athabasca Glacier. 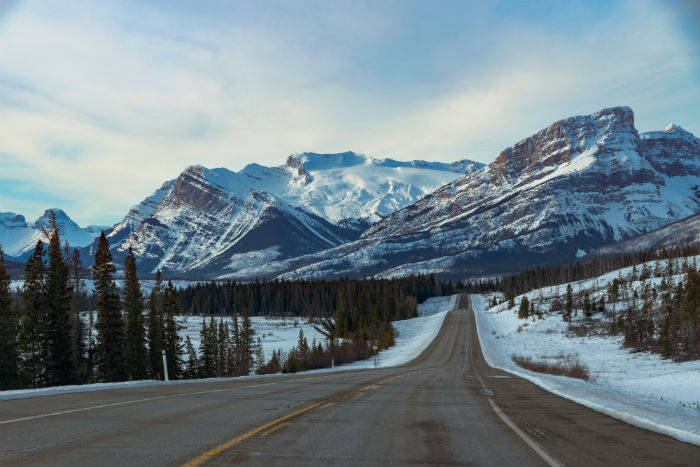 Every July, Canada gears up for the Calgary Stampede. Staying true to its cowboy roots, the Calgary Stampede has been recognized since 1912. It is one of the world’s largest stampedes and attracts visitors from all over the globe. It has all types of rodeo and cultural exhibits, country music, and other attractions. Local businesses get in on the celebration and offer deals at the local restaurants and stores. 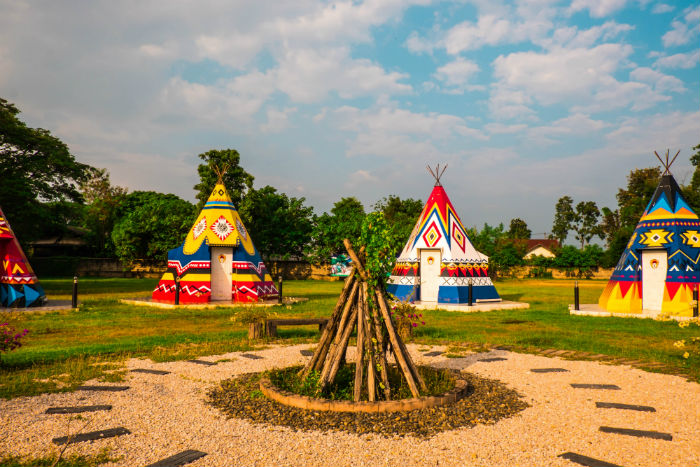 The West Edmonton Mall is not just for shopping, it is for experiencing. This mall is a complex that houses an ice rink, aquarium, waterpark, mini-golf, movie theatres, and restaurants.

Before ending…a brief guide of Alberta

Canada touts interesting and unique dishes that honor its social and cultural diversity. Here a few dishes to try on your visit:

Let’s first start with the basics . . . passports. You will need a passport if you travel to Canada by air. However, if you cross the border by land through one of six entries through Montana in the United States, a United States Passport Card will suffice. It is also less expensive than an international passport.

Several international companies provide rental cars in Alberta like Thrifty, Avis, Enterprise, Avis, and National. You drive on the right side of the road and steering wheels are located on the left side of the vehicle. Be on the lookout for wildlife crossing the road. Moose and elk are dark and blend into the night so proceed with caution. Also, tourists are warned to not get out of their cars to look at animals.

Edmonton and Calgary have international airports. There are also airports in the majority of cities in Alberta so you can travel throughout Canada. You can also connect with car rental companies, taxis and buses at these airports.

VIA Rail provides rail service to and through Alberta except for Calgary. CTrain provides rail service in Calgary.
It is prudent to check the Alberta Motor Association (AMA) to obtain up-to-date information about traffic and weather. Radio stations from Edmonton and Calgary also give updates

Any of the sites featured in the “must-sees” section are visited by the following tour companies:

In conclusion, Alberta is a nature lover’s paradise. The air is crisp and it offers a variety of culinary tastes, terrains, and climates that provide unique experiences. Outside of the “bear thing”, it is considered to be safe. I say, go for it!

I hope you’ve learned a lot about this awesome place in the world. Fell free to share with other travelers your favorite spots commenting below. In case you have any doubt about organizing your next journey, do not hesitate to contact me on the e-mail: gabriela@nomadicmindtravel.com.

STAY UPDATED ON THE ULTIMATE TRAVEL TIPS AND NEWS! 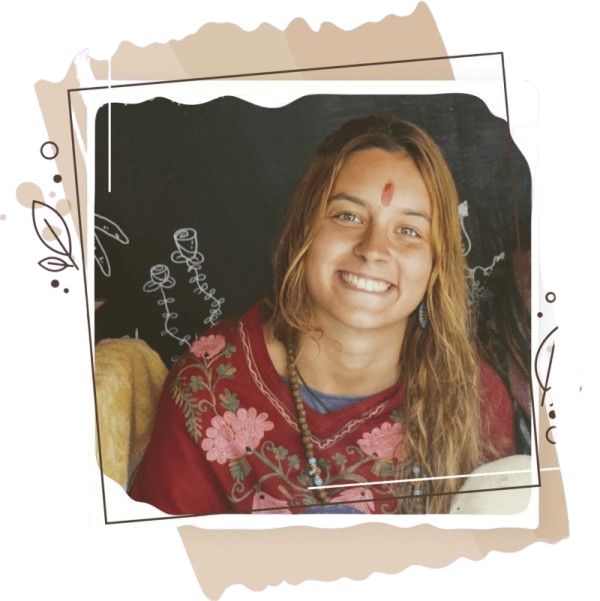 I am an enthusiastic digital marketer and an obsessed traveler in a never-ending love affair with solo world travel.

I am here to help you travel safer, cheaper, and longer.

Sign up to get my best travel tips and the ultimate guide to travel more in a safer way.

1. How to optimize your resources while traveling
2. Budget breakdown: Prevent your income & expenses to create an efficient plan
3. How to live traveling
4. The ways to go on an adventure and fulfill your dreams

SEND ME THE GUIDE DO YOU WANT TO BECOME A FULL-TIME TRAVELER?

Download my free travel guide ''How to become a full-time traveler | Budget breakdown'' and become part of the Nomadic Community where you will benefit from special content and exclusive products.

HOW TO BECOME A FULL-TIME TRAVELER

YOU WILL ALSO HAVE THE BENEFIT OF EXCLUSIVE RESOURCES, CUSTOMIZE ADVICE AND HELP!

THANK YOU FOR YOUR TRUST!