Prague, its capital, is considered the most beautiful city in Europe

General aspects of the Czech Republic

Your first words in Czech:
Hello: Ahoj
Goodbye: Sbohem
Please: Prosím
Thank you: Děkuji
Yes/No: Ano/Ne
Currency: Czech crown (CZK)
The capital: Prague
Population: 10, 58 million
Main religion: Atheist
Safety Rating: According to the Global Peaceful Index, Czech Republic is the number 10 out of 163 countries.
Solo female traveler: Easy and safe. During the day and during the night it is safe for a solo female traveler. You will never feel unsafe in this country. I usually get lost everywhere and here, everyone was always helping me until I got to the place I wanted to go.

The climate in the Czech Republic is continental, with cold winters, during which the temperature is often below 0ºC, and warm summers, during which nights remain cool.
Precipitation is fairly frequent, but it’s not abundant in most of the country. However, being scarcer in the winter months and more abundant in late spring and summer, it is generally sufficient for agriculture.

Depending on the seasons:

During winter, from December to February, in Prague and in the other Czech cities, temperatures hover around 0ºC (32 °F). The weather is often dull and cloudy and light snowfalls can occur. On the contrary, outbreaks of cold from Russia can bring intense frosts, with temperatures dropping to -20/-25°C in the worst moments.
In spring, from March to May, the weather is unstable. The first warm days alternate with the return of cold weather: frosts and snowfalls can still occur in April, especially in the first weeks of the month. There’s usually an inflection point in the second half of May when the maximum temperatures regularly reach or exceed 18/20 °C (64,4/68 ºF) , and the weather becomes enjoyable.
Summer, from June to August, is usually warm. There is a moderate amount of sunny days, during which showers or thunderstorms can erupt in the afternoon. Even in mid-summer, there can be cool and rainy days, with highs around 20 °C(68 ºF). There are also hot periods, during which the temperature may exceed 30 °C (86 ºF) for a few days. However, temperatures are usually pleasant, with highs around 22/24 °C (71,6 ºF) and lows around 12/13 °C(53,6/55,4 ºF).
Autumn, which goes from September to November, is initially pleasant in the first half of September, and then becomes progressively more cloudy and cold, with fairly frequent rains.

Accommodation in the Czech Republic is cheap, if you are traveling on a budget you will find great places to sleep with shared facilities for 8 $. As soon as you walk away from the capital and main touristic places in the country prices could slightly decrease.
If you are looking for a private room and bathroom, prices will increase until 27$.

Main Airports in the Czech Republic are Prague-Ruzyně Airport, Brno-Tuřany Airport, Ostrava-Mošnov Airport, Karlovy Vary Airport and Pardubice Airport.
In my opinion, if you want to discover the country, it is not worth it to use the plane as the train railway is one of the best in Europe.

The Czech Republic has one of the densest railway networks in Europe and an extensive bus network. Both forms of transport are reliable.
In order to book a train ticket do not forget that SnyRychlik, Šný, and Express are the ones that have direct trains (the fastest) and in the company Osobní, they have the trains that make several stops during the trip.
In Prague, you can use trams, buses, subway, ferries and also a funicular railway.
Bicycle is always my favorite idea to discover the cities!

Main traditional dishes in the country are:

5 main things to do in the Czech Republic

It’s impossible to visit Prague without taking the time to traverse the city’s most important river crossing, the spectacular Charles Bridge (Karlův Most). This famous structure spanning the River Vltava was built in 1357 and has many unique points of interest along its 520-meter span, including numerous fine statues. There are incredible views of the river from here! 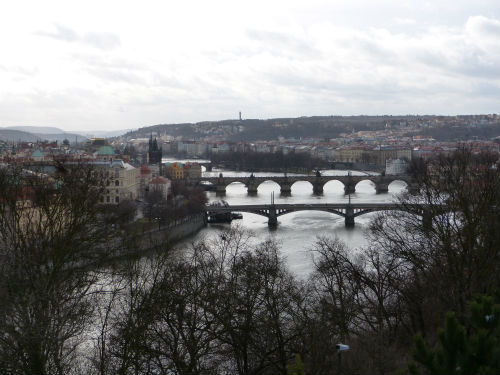 This is one of the most beautiful corners of the Czech Republic is Eastern Bohemia, home to the spectacular Bohemian Paradise (Český ráj). This area of outstanding natural beauty is famous for its many massive rock formations that protrude from the ground like spikes and pillars, it was formed by tens of thousands of years of erosion by the elements. Now as UNESCO Geopark, the region draws hikers and sightseers from across Europe for its stunning sandstone hills, natural bridges, and tall basalt columns and outcroppings, all accessible by a network of trails and scenic drives.

One of the most visited monuments in the whole country. It is an incredible castle, you can not miss it! FOTO!

One of the most beautiful cities you can visit on an excursion from Prague is, without a doubt, Karlovy Vary. Also known as Karlsbad, it is one of the most famous spa cities in the world, which had its peak in the late 19th and early 20th century. In this very beautiful city of baroque architecture, you will walk through the colonnades where the sources of medicinal waters are located, and you will be able to see corners such as Diana’s viewpoint or the orthodox church of Peter and Paul. 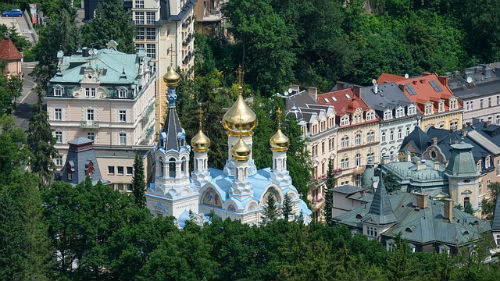 If there is a town with a special charm in the Czech Republic, that is Cesky Krumlov, which you should visit on a day trip from Prague. With a very special location, it is in a meander of the Vltava River and at the foot of the hill where its huge castle extends, Cesky Krumlov is the best example of a “fairytale town”.

If you are looking to have good night time, do not miss Karlovi, in Prague, the biggest disco in Europe with 5 floors!