Here you have your full guide if you are thinking of traveling to Spain!

FEEL THE HEAT OF SPANISH PEOPLE

General Tips to travel to Spain

Your first words in Spanish
Hello: Hola
Goodbye: Adiós
Please: Por favor
Thank you: Gracias
Your welcome: De nada
Yes/No: Sí/No
Currency: Euros since 2002
The Capital: Madrid
Population: 46, 72 millions
Main religion: Catholic Christianity
Safety Rating: According to the Global Peaceful Index, Spain is the number 32 out of 163 countries.
Solo Female Traveler: Easy and safe. During the day and during the night it is safe for a solo female traveler. There is a lot of activity and party during the night until the early morning. Try not to go back to the accommodation alone to avoid problems.

The weather varies depending on the area of Spain you are in.
The north of Spain: During the summer temperatures are around 21ºC-25ºC (70-77 ºF) and in winter 4ºC-8ºC  (39-46 ºF). It is windy and it rains very often. Good beaches if you enjoy surfing.
The central area of Spain: More extreme temperatures. During the summer it is very hot, it could reach up to 38ºC and during the winter, temperatures are mostly between 0ºC and 6ºC (32 ºF and 43 ºF). In the capital, the rain is scarcer.
South of Spain: Good temperatures and good weather for the whole year. During the summer the temperatures are around 29ºC (84 ºF) and, during the winter, they are not lower than 13ºC (55 ºF).
Talking about the islands…
The Canary Islands are known under the name of “Fortunate Islands”, among other reasons for their eternal spring weather, with a thermal oscillation of 6 ° C  (42 ºF) between seasons, facilitating the possibility of sunbathing and bathing in their beaches throughout the year, with an average between 18 ºC and 24 ° C (64 ºF and 75ºF).
Balear islands are characterized by a Mediterranean climate, which can be described as moderate to subtropical due to regional differences. The weather is impressive, with around 300 sunny days throughout the year, so expect a mild winter, in addition to the hot summer months. The rains in Mallorca usually come from the northwest and spill on the heights of the Serra de Tramuntana, not very usual.

There is a lot of variety in relation to accommodation in Spain. You could find well-located hostels for backpackers in the cities for 10-13$/night. There are also a lot of choices of mid-budget hotels and apartments with prices around 22-27 $/night.
Due to the richness of its landscape, I strongly recommend spending a night on a rural house in the sow of the central part of Spain.

Spain has a good number of international airports where you will be able to pick up a plane to everywhere in Europe and good connections to travel outside Europe.
Regarding local transport:
To move around the Spanish cities the cheapest transport to be used is the Bus. A well-known bus company is ALSA.
Also, a common way of traveling in Spain is by using the App BlaBla Car. If you have never heard of it, let me explain it briefly: It is an app where a driver uploads their route and then, unknown passengers book a seat in their car in case it matches with their route. What do people gain with BlaBla Car? Cheap transportation and meeting new people.
In case you want more flexibility, you have hundreds of options to rent a car. Probably the best option is managing it the moment you arrive at the airport.

A Mediterranean diet is followed in the whole country. The most typical dishes are Paella and Spanish omelet (potato omelet). Don’t forget to try them once you travel to Spain!

A very special and cheap Spanish concept is ”tapas” a way of serving food that consists of very small portions of famous Spanish dishes, in many places they are also served for free when ordering a drink.
In Barcelona, the famous breakfast is called Tumaca Bread, it consists of bread with a base of tomato, olive oil, and garlic.
In Madrid, a very local dish is the calamari sandwich with mayonnaise. Don’t go from Madrid without tasting it!

5 main things to do in Spain

A lot of magnificent routes with one same objective: Arriving at Santiago de Compostela. It is mainly made under a religious propose, but also under a sportive and nature observing propose. People usually do it on foot, by bike or on the horse! 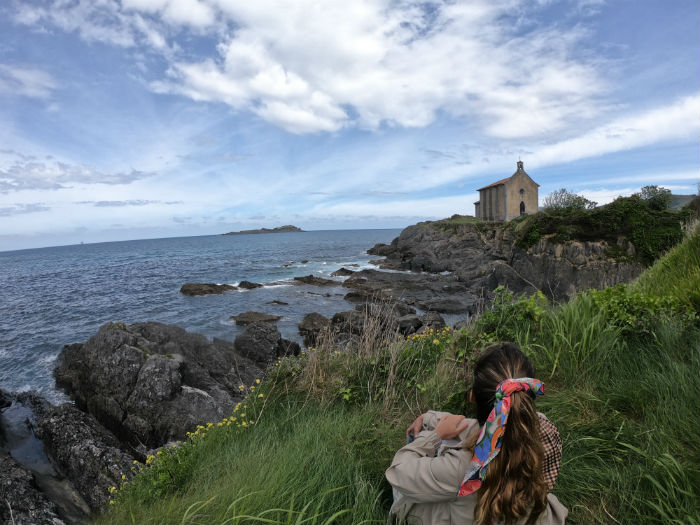 Visit the Alhambra of Granada

The Alhambra is located in Granada, in the region of Andalucía. It consists of a set of palaces, gardens, and fortresses. This set of magnificent architecture houses, a true citadel within the city of Granada itself, served as accommodation for the monarch and the court of the Nasrid Kingdom of Granada.

Trekking in the Pyrenees

The Pyrenees is a mountain chain located in the North of the Iberian Peninsula, which acts as a natural border between Spain and France.

Enjoy the cheap and delicious tapas

Go to a bar and order a drink, you will be surprised with delicious tapas!

Surfing in the North of Spain

Great surfing spots such as Mundaka (in the Vasc country) to enjoy the waves!